The Party at The Manor was supposed to be a fun night for all involved - and it was, until The Host was brutally murdered!

All the Guests are locked inside, and there is a Killer on the loose. Each hour brings a new gruesome murder - and only you, The Detective, can solve the case before it's too late!

Murder! is a solo RPG about trying to solve a mystery while struggling to stay alive - knowing fully well that death hides in every corner, nobody is safe, and everybody has secrets to hide.

It is inspired by murder mysteries such as Clue (the board game and the 1985 movie), Knives Out, and the entire Agatha Christie body of work - with a tiny pinch of Hereditary, Seven and Hannibal thrown in to keep things interesting!

You are likely to die, and unlikely to be remembered.

Content Warning: Enclosed inside, you will find themes that can relate to murder, violence, animal harm, occultism, blood, body harm.

Rules for drawing all four suits at once were inspired by HyveMynd and Litza from the #WretchedJam discussion forums - check their games out!

In order to download this Murder Mystery RPG you must purchase it at or above the minimum price of $8 USD. You will get access to the following files:

Support this Murder Mystery RPG at or above a special price point to receive something exclusive.

Regardless, we'll try to always leave at least a couple of them available.

I was surprised to find this game that plays with the Wretched and Alone mechanics and twists them to change the entire concept of the system. It really felt as if I was a detective cracking the case. The assassin escaped in my case, but I had almost all the clues I needed to find out who it was!

Heck yeah, we're happy you enjoyed your time with Murder! The Wretched and Alone system is so freaking good we had a blast playing with its mechanics to give it our own spin!
Sorry the assassin escaped - hopefully you'll be able to catch them before they kill too much people on their next spree!

I bought this not being familiar with RPGs really at all. I've never played any tabletop RPGs or solo. I assumed there'd be a definitive ending/answer or some way aside from luck in finding the Killer, but there's not. It wasn't what I was looking for but can see how it would be a lot of fun for someone who is very into storytelling without a definitive outcome!

First of all, thank you very much for giving our game a try as your first ever tabletop RPG! We hope you were still able to enjoy it even though it wasn't exactly what you had in mind! We did purposefully write the game to be open ended and up to how each player decides to attribute meaning to what they find - but we are aware that may not be everyone's cup of tea!

Still, if you'd like to play a game using the same base set of rules (but giving them its own particular twists), with similar mood and references, but with more definitive outcomes, we couldn't recommend Lari Assmuth's "A Weekend In The Country" more!

After getting a freebie I wanted to pay for one so you would pay it forward for me. Btw I use a grab bag w/30 die of which 1 is unique, when drawn the jengo falls down. I this is better than other dice ideas as there is a immediate loss mechanism that other alternatives miss.

Thank you very much for your support!!
And the grab bag idea also sounds very good and should make a scary experience - we'll give it a try next time we play a Jenga game, probably also removing one of the normal dice each time you draw them, so the difficulty increases by each pull!

Played this as my first Wretched & Alone experience, as I'm a big fan of Clue, Murder by Death and Agatha Christie.

Since I hadn't played The Wretched or any of the other W&A games up to that point, I really didn't have the basic knowledge to fall back on.
I think Murder! would play better for someone more experienced with the system.

For me, I had two issues.

The first was that when I drew the initial cards, I mistakenly thought that they were to handle the investigation of the murder of the host. Until I drew the room and wondered how his body could be found in both the Bathroom and the Kitchen.
So I ended up changing the name of the victim to someone else and continuing on from there.

The second was that it felt like it just went from murder to murder with quick succession. There was no intermission for detective work. At least not that I could see.

I do want to thank you for putting out an item that brings attention to the traditional murder mystery, however.
I hope I'm not too critical of it.
I'll likely come back to it later once I have more experience with W&A.

Thank you for your criticism - we hope you were still able to enjoy the experience despite finding some shortcomings!

Our intention was for the intermission for detective work to happen during the journaling phase, by creating theories from the pieces of each murder - we do reckon that's a more subjective process than one might've hoped for, and although it has its purpose, criticism of it is completely valid, so thank you for writing this review! We'll keep it in mind for our next releases :)

Thanks for the reply.

I will try it again later when I have more experience playing journal games.

Do let us know how it goes when you play it again! :) 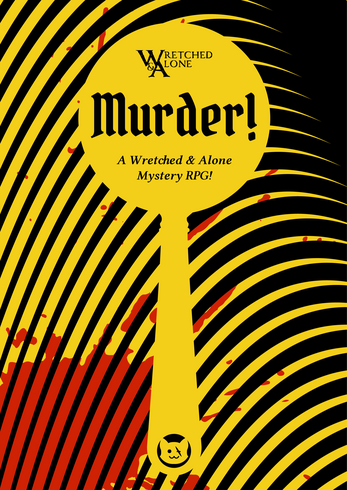 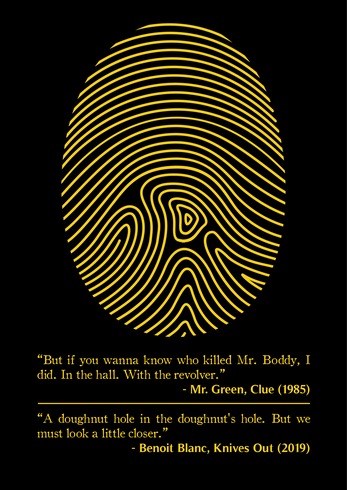 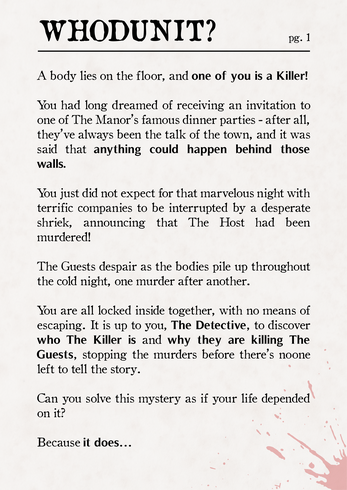 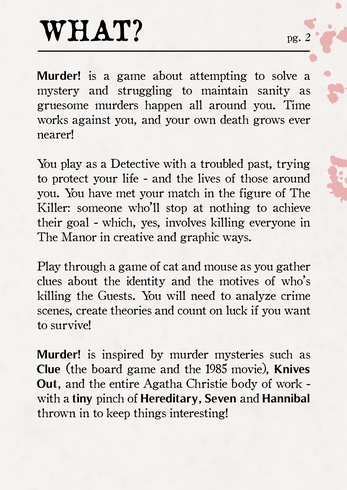 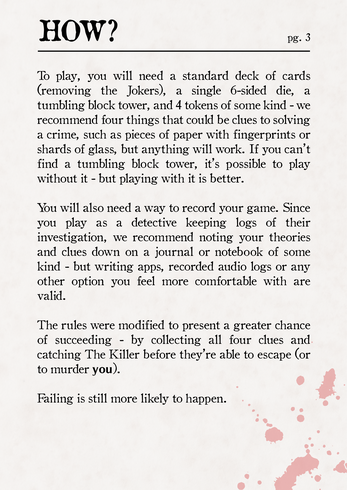