Friendly Neighborhood Superhero is a solo tabletop RPG (with optional rules for group play) about superheroes who go on adventures to, sure, fight crime - but with the major goal of helping their neighbors and leaving their neighborhood a better place!

Generate problems and citizens; create scenes through a simple and dynamic system; and play to find out how your actions transform your neighborhood for the better!

To play this game, you will need:

This game was made for Riley Rethal's #beyondsuperjam during May 2020.

In order to download this game you must purchase it at or above the minimum price of $10 USD. You will get access to the following files:

Each new sale adds 2 Community Copies to the pool, and we'll always leave at least a few of them available.

Hi, I'd like to try the game out but cannot afford to purchase it at the moment. I'll be very grateful to grab a community copy but they're all claimed right now (:

Hey, Stan!
Jut added a few copies! Hope you have some fun helping your neighborhood and going on some saturday morning adventures!

(PS: that's a great profile picture, we stan a kitty grooving to their favorite songs!!!)

Thanks a ton! Hard to beat a Cat scratcher in terms of their positive influence on the Feline world, let alone an entire studio full of them. Thanks again for sharing your creation and your generosity :)

Friendly Neighborhood Super Hero is possibly the crunchiest solo trpg I've seen. It's got a solid aesthetic, and it's extremely easy to read, but it's a standout case of journal optional, dice required.

And frankly, it makes it work.

In some ways, FNSH is like an open-ended Lone Wolf or Fighting Fantasy book, and that's kind of incredible. Character creation is about as detailed as it would be for something like Fate, with identity, superpower, attributes, and neighborhood all being things you create before starting gameplay. Furthermore, each attribute has an advancement track and a damage track, and it *is* possible to lose the game---although canonically your loss merely motivates your community to get its act together, so if your game goes poorly, it's still going to feel fitting and interesting, rather than heartbreaking and demotivating (although admittedly some of the attribute failure text does lean towards "you did badly and everyone is laughing at you.")

FNSH has a lot of random tables for generating custom situations, but once you've figured out what issue your hero is tangling with today, the dice system comes into play. The basics of it are, you have a d6 pool based on one of four attributes. You can add bonus dice if you use your signature power, or a bunch of bonus dice if you use a limited super move. However, different challenges are strong against different attributes, so specialist and generalist builds are both pretty evenly balanced.

You gain xp by clearing challenges that are strong against the attribute you are using, or by failing challenges, but every time you fail you can immediately launch a new attempt, and every time you succeed challenges start becoming strong against the attribute you are using, so the game has some pretty powerful rubber-banding to keep you from getting stuck in a lose-more spiral or simply mechanics-sledgehammering your way to victory.

There's also quite a lot of progression in FNSH, and in addition to tracking your attributes advancement/damage, your xp, and your various upgrades, you can also permanently build structures/policies in your community that give you bonuses whenever they come into play. It's a neat extra layer, and gives you a feeling of actually shaping your environment through your actions, rather than just becoming stronger as a hero. There's even multiple options for connecting a string of games into a campaign, or even running FNSH as a multi-solo-player game with a GM, creating a few extra layers of depth.

Finally, FNSH doesn't advertise itself this way but it may also be worth taking a look at as an all-ages game. Structurally, I think it's kind of perfect for ages 9+, as it trains creativity, logic, and writing, all in an enjoyable, interactive way---although admittedly it does say hell as part of a newspaper headline (p.12) and ass as part of some rules text (p.17), and I'm aware that there is a plurality of feelings about when fighting is justified, so please read through first and use your own judgement if FNSH as an all-ages game is something you're interested in.

Overall, this feels like a heck of a sleeper hit. Even if super heroes aren't your thing, its engine is genius, and feels easily convertible to any other genre or tone. One thing I'd sort of hoped for from the game (mechanical bonuses for helping a real-life community you're part of) isn't present, but it's completely easy to house-rule in if you want to go that route.

If you haven't picked up a copy of this yet, and if you enjoy journaling games, superhero games, or gamebooks, I strongly recommend it.

Thank you so much for such a well thought out review! We honestly think we couldn't have described our own game better - and it feels really nice to see so much of what we intended resonated with you the way we wanted! We're happy you enjoyed your time with our game :)

(Is it okay to share this review on our social medias? We'd love to pay it forward and help bring more people to your reviews and to your games!)

It's a really, really cool game, and I'd love to see more titles exploring this sort of roleplaying-gamebook approach. 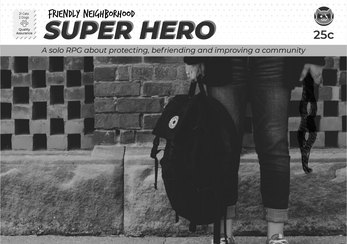 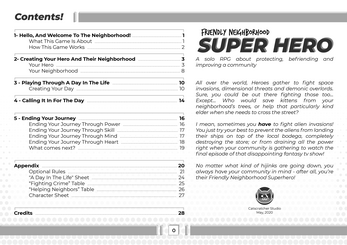 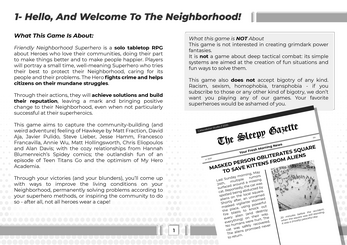 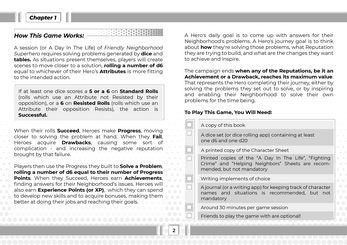 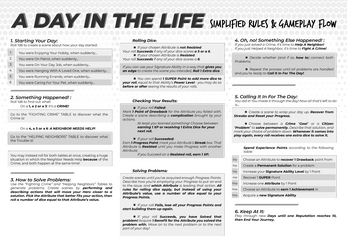 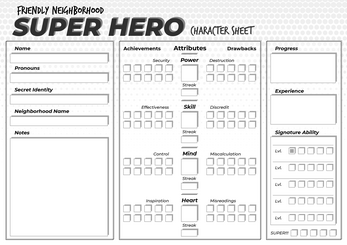