Gods have caused too much harm - but now it’s their turn to fall.

You are the pilot of the Slayer, a mech made of ancient technology, cutting edge science and unexplainable magic spells - and the only power capable of standing up to the oppressive Gods who rule the galaxy through lies, law, force and fear. Your mission is to fly from planet to planet, making alliances and destroying structures of power so you can finally help humanity break free from those who control them. It is your goal, your destiny and your responsibility to attack and dethrone Gods.

Divinity Fall is a solo journaling RPG about fighting against oppressive powers (by using giant mechs).

To play, you will need a single d6, a standard deck of cards (jokers removed) and journaling items of your choice.

This game was made in June 2020 for the “Attack and Dethrone God Jam” hosted by Blue Golem Games on itch.io. It is inspired by - and stands in support of - all the protests happening around the world for racial equality and human rights. Narratively, it takes inspiration from Neon Genesis Evangelion and Mobile Suit Gundam 00. To make it clear: fascists are not allowed to play this.

Content Warning: This a game about generating and narrating situations of oppression and prejudice - although it is aimed at fighting them and destroying those responsible. The prompts are vague enough to allow players to take their stories wherever they feel safe - so please respect your boundaries while playing! Your safety is what matters the most!

In order to download this game you must purchase it at or above the minimum price of $8 USD. You will get access to the following files:

Regardless, we'll try to always leave at least a couple of them available.

Just finished the first planet of my first campaign and am really enjoying it!

I have one question: On page 9, it says you can choose the attribute you use when opposing a god directly, which basically lets you control the damage you'll take if you fail. Elsewhere in the comments it says you always take damage based on the god's goal/motivation card. Is either the intended/recommended version?

Hey, GreenOracle! Thanks for writing - we're glad you enjoyed helping your first planet!

That is a good question - and honestly, either way works. Our initial idea was to make the choice of Attribute when opposing gods directly be more narratively inclined - to add flavour and context to the action, since they don't contribute to that particular roll. The gods would then always deal damage according to their cards...

That being said, having the damage be tied to the attribute you chose to oppose the god would add another strategic layer to that confrontation and allow you to better manage your health points - which is also cool!

So yeah: original intent was to make gods always deal damage according to their card, having your Attribute act as a narrative device to frame the scene - but taking damage according to your chosen Attribute sounds fun as well, so feel free to play it that way and see how it goes (it should make for a slightly easier game, since it would become easier to avoid defeat - and honestly, the universe could really use Slayers who stick around a little longer)!

Thanks for the clarification! I played this planet with the ability to choose what pool I was risking against the god and I'll probably stick with that for this campaign, but I'll definitely try the other style for the next one. It seems like the rules can be pretty customizable without much effort.

Opposing the god was pretty interesting from a character perspective. I failed five consecutive presence checks and then killed it immediately when I switched to combat, which has some implications for my pilot going forward.  It was kind of a weird god. Power motivation, but it had Power 1, Terror 3, and Hunger and Lies of 10. Very fun setting up the initial world.

Oh, dang. It does sound like your pilot will need to undergo a lot of soul-searching to figure out the consequences of that clash (love that for the story... Sorry, pilot!)

The stats for the god also sound super fun?? The way their lowest stat was also their motivation, but they had 10 Lies gives serious "power is whatever people believe it to be" vibes, and we're definitely here for it! Very curious to hear how you set it up!

Is there place for after-action reports, like a discord or forum or similar community space for your games?

We don't have a place like that currently, but it's something we've debated and may end up happening sometime in the future!

For now, we'd love to see some after-action reports as threads in the comment areas of our games, so everyone who plays can see each other's journeys? (we will probably add a few reports ourselves!)

I really liked how you portrayed gods in your game when I played and used it when creating a (non solo) TTRPG I made as a birthday gift for my friend. Any way I can share it with you, since this was such a fantastic inspiration? I dont have twitter.

Oh, heck yeah! That sounds awesome and we'd love to see what you came up with!! Would you kindly shoot us an email at catscratcherstudio@gmail.com??
(Also, would it be alright if we shared it on our social medias so people could see it too?! :D)
Cheers!

It says when you oppose the god directly you take “damage as usual” but I’m not sure what it means, as I’m not attacking a certain suit (and would it still be one damage?) any clarification? or if I just missed something pointing me to what I missed it would be very welcome

Hey, thanks for the question and glad to know you're enjoying hunting gods!

When you fail to Oppose a god, you take 1 point of damage according to the suit of the card you picked to determine which were the god's goals and motivations - so if you're attacked by a god who aims to Deceive or Despair, you take Pilot damage; while a god who aims to Devour or Destroy deals Slayer damage! Thanks for reaching out, we'll make sure to make that aspect clearer when we update the pdf!

that actually makes tons of sense, thank you lots for the clarification

No worries! We hope you have fun taking down oppressive behemoths and their structures of power!! Let us know if there's anything else we can help you with :)

I'm really liking it so far! One question, is pilot and slayer damage intended to carry over from god to god or was it supposed to reset?

Alternatively, I suppose it would be an interesting way of having an adjustable difficulty and tone from game to game to switch high health/low health and resetting damage/carrying over damage.

Oh, good question - we totally let that slip! The damage was intended to be carried from planet to planet, but resetting damage/carrying over damage is indeed a very nice way to adjust the difficulty - we should probably add that to our next revision! Thanks for the heads up, and glad to know you're enjoying your time hunting gods!

This is a very cool game. (Anything evoking Neon Genesis Evangelion is very cool.)

I have a question--when you Oppose a god, you don't count attributes. But do you take damage as usual? Can you make the Oppose move just once against a god?

The instructions speak about the consequences of failed Oppose rolls on structures, but I didn't know if the same rules applied to the gods.

Thanks, we also love Neon Genesis Evangelion over here!! We Can (Not) Wait for the final Rebuild movie!

And thanks for the heads up! When opposing a God, you do take damage (and draw a card) as usual. You can also Oppose them until one of you falls. We've updated page 9 to make these rules clearer - and we also added some new rules for escaping a planet when things are going south on Page 10, which was an update we were already playing with and thought this was a good time to include!

Hope you're enjoying your time making Gods regret their ways!!

This is really nice! I have a question, though. How much damage do we take when we miss on a Oppose roll? I was unable to find that info. Congrats on a great game!

Oh snap, we totally let that slip! We're going to edit the PDFs to make it clear!

It should be 1 Damage of whichever Suit you were Opposing (or 4 if you miss an Oppose roll while performing the Overwhelm ability).

Thanks for trying it out, glad you enjoyed it :D 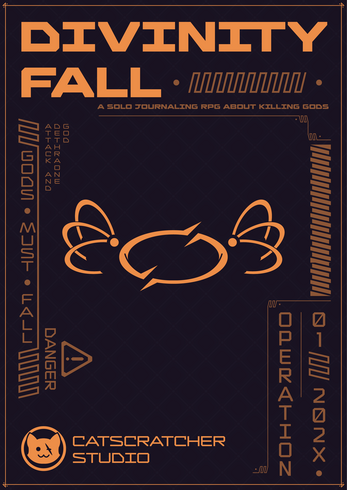 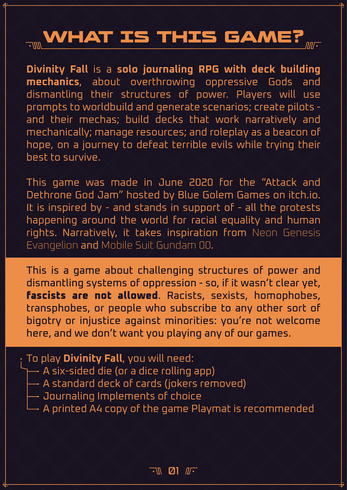 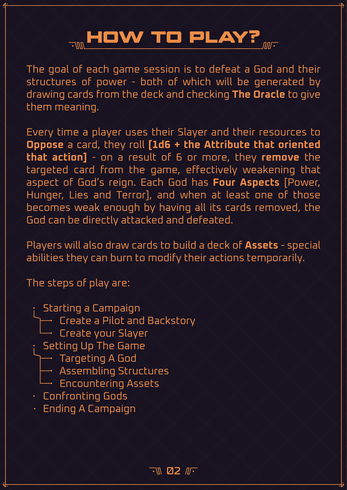 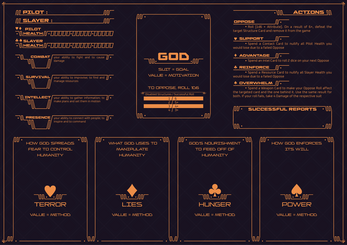