The Beast is back, devouring hope wherever it goes.

We need the Hero of Courage to save us once more…

Courage is a solo RPG using the Carta System to create a dungeon-crawling experience inspired by games from “The Legend Of Zelda” series. You’ll play as the recently awoken Hero of Courage, exploring Dungeons and gathering power for your final confrontation against evil incarnate.

To play this game, you will need: 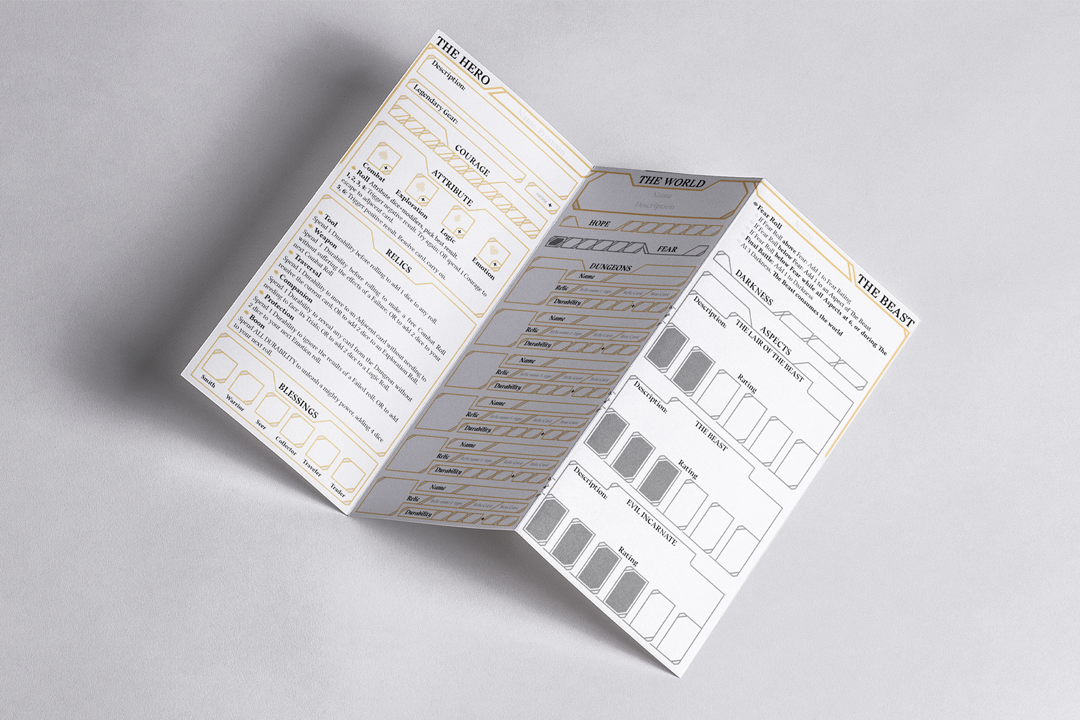 This work is based on the Carta system (found at https://peachgardengames.itch.io/carta-srd), from Cat McDonald and Peach Garden Games, and licensed for use under the Creative Commons Attribution 3.0 Unported license (http:// creativecommons.org/licenses/by/3.0/).

The Carta logo is © Cat McDonald, and is used with permission.

(This game was made for the #CartaJam, so please check out all the other cool stuff made with this awesome system!)

In order to download this game you must purchase it at or above the minimum price of $10 USD. You will get access to the following files:

Regardless, we'll try to always leave at least a couple of them available - but if there are none and you really want to play it, send us an e-mail or a tweet and we'll send you a copy ASAP!

I just picked this up in your black friday sale. I'm planning to do a recorded playthrough of several of your games as part of my podcast/youtube https://anchor.fm/instadeath

I'd love to have you on for an interview too. Let me know how I can contact you.

Thank you so much for buying the bundle - and HECK YEAH!! We can't wait to listen to your playthroughs and we hope you enjoy them. We'd love to hop on the podcast and have a chat :)

You can reach us either through twitter at @catscratcherdev, or through e-mail at catscratcherstudio@gmail.com - whichever works best for you :)

Thanks for showing interest and reaching out!

It's 52 pages, with a clean, readable layout.

To play, you need dice, playing cards, and a journal, and a typical game consists of seven dungeons---each about half an hour to play through.

There's a certain...triforce-y aesthetic to the book, and Courage wears its Zelda influences pretty openly. It also plays with the formula in some interesting ways---for example, you can fail dungeons and keep playing. Each failure simply makes the final confrontation with Gann--er, I mean The Beast, harder. And you can fail your final fight with the Beast as well and use it as a launching point for a campaign two.

Gameplay-wise, there's some solid crunch to Courage. You have stats which get rolled, a magic item when can boost rolls when it makes narrative sense, and a pool of hit points called Courage. There's also short-term progression (improving your magic item,) and long term progression (shuffling your stats between campaigns.)

The meat of Courage is its dungeons, which are built from grids of playing cards. Each dungeon has a relic (which unlocks the boss) and a boss (which ends the dungeon.) As you traverse a dungeon's card grid, each card corresponds to a prompt in the book. Most of these involve testing a stat or losing Courage, but a few trigger subquests, recover your resources, or do other things to stand out from the average dungeon room.

Courage leans into its journaling game engine and it provides lots of opportunities for you to world-build, in addition to addressing the prompts on the dungeon cards. There are some great random tables as well, and the overall process of GMing yourself is pretty effortless. That said, Courage is pretty beefy for a solo game. You'll have to refer to the book periodically the first time you play.

In terms of player resources, the book is well-written and easy to understand, but there's also a quickstart guide at the end. This helps a lot, and it means you only need to read the book through once. The quickstart guide is very thorough.

Overall, if you like Legend Of Zelda and might want to try it as a trpg, or if you want to play a solo game with a good mix of storytelling and crunch, and if you have at least half an hour to spend saving the world, I would strongly recommend checking this out.

-Page 8, Adjective is misspelled on the two tables.

Hello everybody. I just read the book and have already decided on the scenario that I will use Corage. I will use the world of Krull and impersonate the son of Prince Colwyn and Princess Lyssa. But I leave a doubt. To do the attribute tests, should I use D6 according to the right attribute? that is, if I have combat 2 roll 2d6 and we are the right value?

Hi there! Just finished my first dungeon run in this game and LOVED IT! Never played a solo ttrpg before but I have been writing a record in a notebook of the adventurers of Flynn, wielder of the Sword That Time Forgot and having an ABSOLUTE BLAST! Just worried that there are a couple of rules I may have been getting wrong, so thought I would comment to check because flicking through the pdf didn't offer clarity: Does your Courage go back to 10 at the beginning of every Dungeon? Or does it stay what it was before? And when you lose courage and go back to the beginning, does it also go back to 10? And the playbook notes that courage starts at 10 but may go above that - does that mean that when you "recover 2 courage" from an oracle that you can go above 10 courage? or is 10 a max, and there's cards I've not encountered yet that can increase that max?

Hey! We're so glad you're enjoying Courage as your first solo ttrpg!! (and dang, "Flynn and The Sword That Time Forgot" sounds so good, we're already imagining the adventures you going through!)

Again, really glad you're enjoying the game!! Thanks for pointing those out, and let us know if you have any other questions :)

Hey, this is looking good so far. One question I have is about attributes used to face a trial. Say, for instance, the 2 of Spades is a trial of Combat and Exploration. How many rolls do I make? For instance, do I roll first against Combat, and then again against Exploration? Or do I instead combine the two attributes and roll using that total of dice? Or is it just one roll, choosing either Combat or Exploration?

As far using a different statistic goes, can I simply choose to use a different stat whenever I feel like it? If so, from the consequences that I've seen so far, it doesn't seem like there's a downside to just rolling 3 dice with your highest stat whenever it's called for. The odds of success are so much higher (70% vs 33%), that I'm not sure that the extra damage balances it out, at least at early levels.

Have you considered having failed non-standard rolls also increase the Fear rating by an additional +1?

Anyway, I'm not done with my read-through yet.

I'm now thinking about the Bosses of the dungeons. Once you have the Relic of the dungeon you're going to be rolling +1 die for all rolls in the dungeon, including against the Boss. So if I've got my legendary gear attached to +3 stat and I just choose to use that stat, regardless of what the trials say, I've got about an 87% chance of beating him.

I don't like to min/max. And this game seems like it would feel too hollow to cheese it. I'm just big into analyzing rules and offering suggestions or insight.

About the Trials that present two different Attribute choices: you're just supposed to pick one Attribute, and you only need to roll once (if you succeed). We'll tweak the text to make it clearer on our next update!

And yes, you can simply choose to use your highest stat whenever you want - if that's what your character would do (and how you want to play)! What we realized during our playtesting was that even if you were using the Legendary Gear on your highest stat AND had picked up the Relic, things could still snowball out of control if you drew a Dungeon with a ton of high-value cards and rolled poorly on a couple of the toughest Trials.

We toyed a lot with the damage levels (and the interactions with Fear) during development to try to balance out the difficulty of the game, and this is what we felt comfortable with! We're pretty okay with having a high chance of beating the Bosses - that's actually how we intended the gameplay loop to go in each Dungeon: get stronger, defeat things easier with the powers you've won.
It is indeed possible to cheese the game if that's how anyone wants to play it - and we want you to be able to do that if that's what you feel like doing!
At the end of the day, this is still a game of exploration - and hopefully you'll still be able to use the prompts to lead you through a cool story, even if your Hero didn't find the challenges particularly difficult :)

We really appreciate the insight, and we'll consider these statistics for a possible Hard Mode in our next update!

Hey, so long as that's what you want in the system. I really dig this book. I have no plans to cheese it. Feels like I'd rob myself of drama and immersion. Just like to find combos and things and present them to devs in case it happens to be something unexpected.

I'm really going to get a lot of mileage out of this. Might play some Hyrule games, but for poops and giggles I also want to play one set in the Mushroom Kingdom, and one set in Fantasia/Fantastica, from The Neverending Story.

We will be discussing more options, but your reply did give us a lot to consider! :)

Oh, those are cool options. 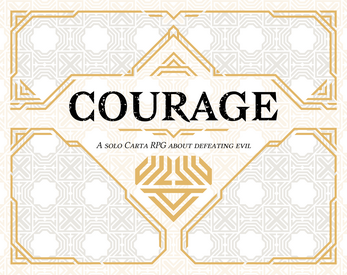